That’s probably the only cool thing I can say in French, and I definitely never used it while there. There was a lot of oui and non, but it was mostly “parlez-vous anglais?” (Yes I had to look that spelling up.) French is not my language, nor is German, or even “Spain” Spanish, thankfully English is the language everyone chose to be the common denominator when it comes to languages. Though I do feel it gives we Americans a handicap, as we don’t feel the need to learn another language (everyone else understand us — for the most part.)

But France was still a lovely country! Our last 3 days were spectacularly filled with just about every activity in Paris that we didn’t fit into the first 2 days. Day 2 started off with a visit to Fragonard perfumerie, complete with my very first perfume purchase! We’re talkin’ the real deal here, folks! Real French perfume, specifically “Belle du Noi.” Smells amazing and it actually lasts, unlike anything else I own, which of course are all “eau de toilette” or “eau de perfume,” and yes obviously I learned all about the differences. Eau de toilette is the weakest of the three, only meant as a quick freshen up (to freshen up a bathroom smell, for example), and eau de parfum is a stronger level, meant to last a few hours, while perfume is meant to last a full day of wear, about 8 hours or so. So I splurged on my first big girl perfume and it was a great choice! So cool to see the actual oil on your skin and know that the smell will last for so long 😉

After the perfumerie, we had a few hours of free time. The coach bus dropped us off across a bridge from Notre Dame cathedral and we waited in the long, but fairly quick-moving, line to go inside. I had my handy dandy Rick Steves “Best of Europe 2014” book with me, so I walked myself through the guided tour (lol, travel dork) and after about an hour found the other kids I was with and we all went for an early lunch just next to the cathedral. Then we proceeded to walk through the Latin Quarter, taking photos and meandering along the River Seine. I’m not proud of it, but we happened upon what was basically a group of gypsies playing a small lottery scheme/game and I and another kid in our group lost a bit of money being scammed into thinking we could win the game, until we realized the “crowd” of people around the game were actually all working together. Terrible judgment on all our parts, getting caught up in the excitement. However walking along the river more and looking at the beautiful view, as well as the lovely art, I quickly put that silly mistake behind me.

Our next activity had us meeting up with the coach bus in front of the Musee D’Orsay before driving out to Versailles Palace. We had only about 40 minutes to wander through the gardens, but it was a special day there! They only turn the fountains on in the Gardens of Versailles every so often (typically once a week) because there are so many of them and the upkeep costs so much! Luckily we arrived just before and walked down to the main central fountain to watch the “show” and then it was already time to head back up to the palace. To give you an idea of how large the gardens are, it was about a 12 minute each way from the palace to the 1st large fountain, walking at a fairly steady pace, and we only saw maybe 1/8th of the gardens. I could have spent all day there, and wish I had! But we had a tour of the palace, and I was also pretty excited for that. I knew the palace was going to be amazingly extravagant because the reason Versailles was built in the first place was because the Louvre wasn’t “good enough.” And the Louvre itself is jaw dropping in beauty and size, so Versailles and its gardens were just over the top impressive! After a few hours of a very informative guided tour from a local French woman, we were back on the coach to head back to the hotel and get ready for dinner.

The bus dropped us off down the hill from Sacre Couer cathedral, and we walked all the way to the top of the hill to get a beautiful view of the city! All the way along, and at the top, there were foreign men selling all kinds of little trinkets, and the trickiest ones are trying to make bracelets on tourists wrists, and before they even know what has happened, they have a bracelet attached to them that the man expects payment for. So pathetic! They tried to stop us on the way up and get going for my wrists and one even grabbed Brooke and tried to pull her wrist away! Not okay. We all yelled at them and quickly kept walking to the top. at the top were even more guys, and the worst was the one selling these plastic flying birds that would set off flying and often crash into people’s heads on the way down. Well I was not going to let that happen to me so just as I saw one heading for me, I firmly slapped and spiked it to the ground, while everyone around me cheered. It was a successful moment, and the man who had let it go sheepishly came to collect it as the whole crowd stared him down. I also quickly ran inside the cathedral and loved seeing the difference in architecture from that of Notre Dame, and others! Then we were off walking through Montmartre, the artist’s district on our way to the restaurant. Dinner was a traditional French restaurant with all of the traditional French cuisine available! French wine, escargot, duck a l’orange, tiramisu dessert (though I had to mostly pass on that one), and finished with an espresso. Then Joel took the whole group to a bar to party away our last night together!

The next 2 days were our “pack everything else in” days. Day 3 started off picking up our Museum Pass, which we aimed to get our money’s worth, and boy did we! The Louvre was first on the list and we made sure to hit all the “big ones,” but fit just about the entire museum into our stop: Mona, The Feast at Cana (click the link to find out why it’s significant and click here to find out why it’s significant to my family), Napoleon’s Apartments, the Venus, the French castle the Louvre was built over which showed the Medieval architecture, and all the Greek, Oriental, Italian, and artifacts from all over the world that the French brought back in their world conquests and now refuse to return to their rightful countries…haha awkward! After an exhausting few hours of battling crowds and wandering through ventilation-less rooms, we took a break to sit in the Touleries Gardens. Then on to L’orangerie Gallery, then the Arc du Triomphe, and all the way up, before heading back to Montmartre for dinner. After getting lost for probably an hour or two trying to find this popular “locals only” crepe place, we found a little cafe after booking what was essentially a dessert reservation at the crepe place. Then we decided to hike all the way up the hill to see what kind of art we could find. And we each successfully found a piece we liked, then back down the hill to make our dessert reservation where I enjoyed a delicious Gluten Free crepe (made with buckwheat flour, if you’re wondering)! Then it was back to the hotel to rest up for another busy day!

After a later start to the day to get all our travel plans squared away, we started our final day in Paris off at the Musee D’Orsay, where we bypassed the line thanks to the Rick Steves suggested Museum Pass! Great deal, seriously! I’m not being paid to say this. If you want to pack in a bunch of activities, it makes so much sense; they have other day passes also. After the Orsay was a walk along the Seine, then towards the Opera House. We first picked up a picnic lunch form MonoPrix, the Target equivalent, although it looks more like a department store in the clothing area, and then we headed to the steps of the Opera to bask in the sunshine and enjoy our lunch. Next we tubed it to the Latin Quarter. We walked around a bit and then decided to find a bathroom stop. Thanks to our Museum Pass, we decided to go to the St. Chapelle chapel, and our bathroom break ended up being way too worth it, with amazing views of some of the most amazing stained glass works of art. And then we found the bathroom. Our final stop was meant to be at the Army Museum but we got lost after getting off the metro and instead ended up in the King’s Cathedral, where we saw Napoleon’s tomb which is a GIANT, even without comparing it to his height.

We walked around and started heading back to the metro but decided that resting on the grass was our first priority and relaxed a bit before hopping on our last metro ride in Paris, with a last peek at the Eiffel tower. Then it was back to the hotel to pack and prep for Spain! 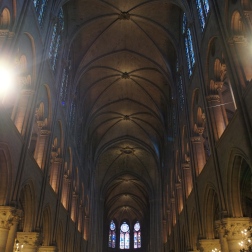 Hanging out with the king of the street 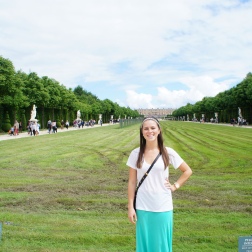 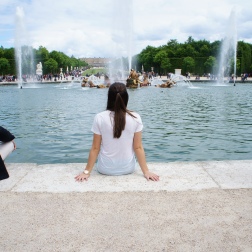 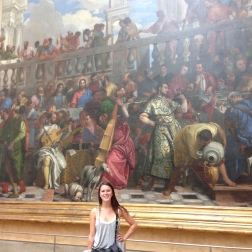 On top of the Arc du Triomphe – 284 stairs later

My face on a Moulin Rouge matchbook… Yeah 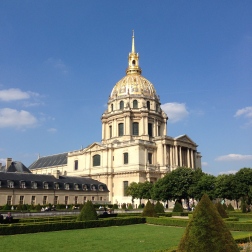