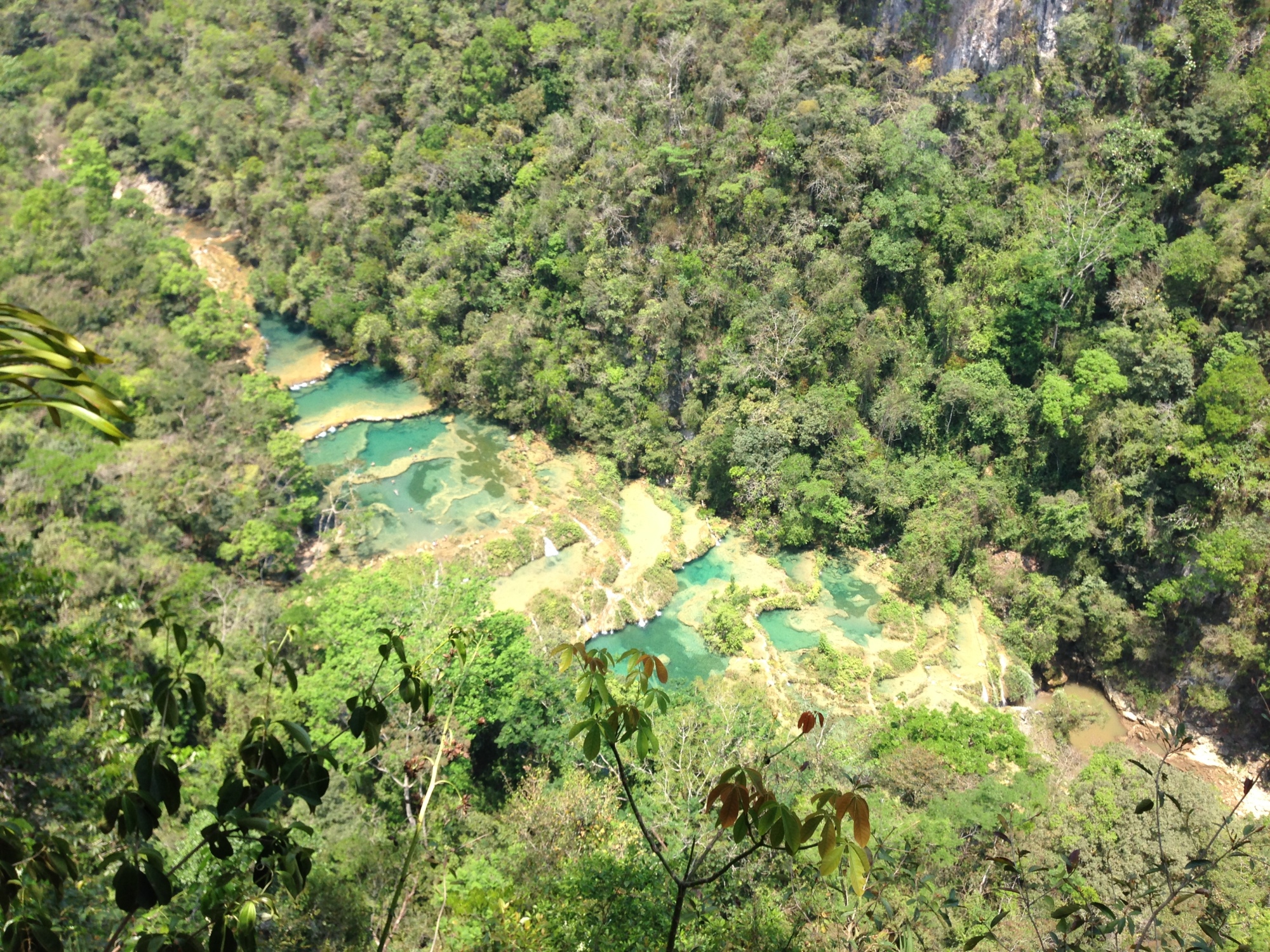 Over the span of my 96-hour trip to Semuc Champey and Tikal, I spent approximately 34 of those hours in various forms of transportation.

My trip started off on Saturday morning with a shuttle from Antigua to Lanquin. Besides the terrible driver, who sucked at driving, especially down hills, and who I eventually climbed up and asked to stop driving so badly and stop slamming the brakes every half second as we drove down a hill. He was confused at first and when he finally got it, he slammed the brakes extra hard as he asked if that’s what I meant by driving more smoothly. I said yes and that I felt like I was going to throw up because it was so bad, so it smoothed out a bit more, but we still had 5 hours left in the bus. I also met a gril named Sarah, who was traveling from Ireland after volunteering, and an older woman named Kathy, from England who was volunteering for a few months in Panajachel. We finally arrived in Lanquin after far too long on a hot, dusty, gravel road because Lanquin is kind of in the middle of nowhere. 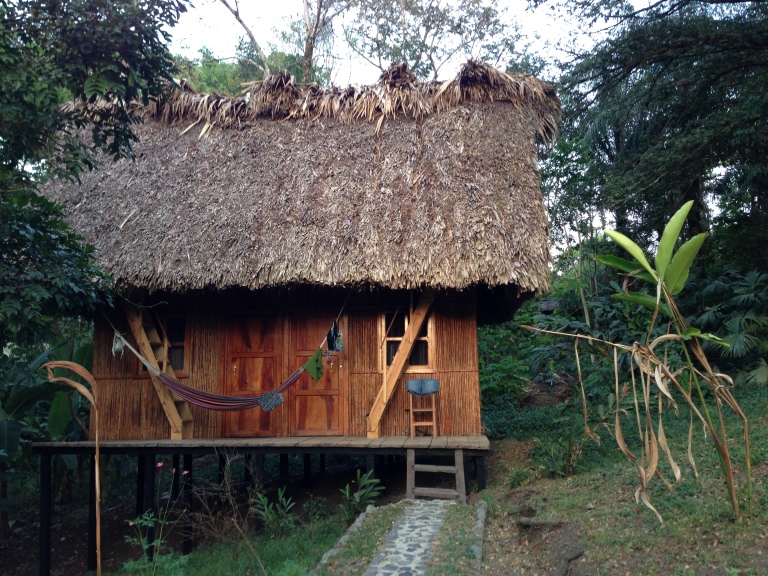 I met up with my friends Nikki and Krystal at the hostel, El Retiro Lodge, and checked into my cute little bungalow room. I settled in and went to yoga on the lawn for an hour. Then dinner was served – it was a Mexican buffet with so many delicious things that I got SO stuffed!! Delicious J A couple people who I had met in Pana, and who were friends with Nikki, were also staying at the hostel with their parents, and we ended up playing giant Jenga with a big group of people for a couple hours. Then the group changed to flip cup – but I hate beer so I had someone drink all my beer as I just flipped the cup. We stayed up pretty late and had a blast with a random assortment of people from: England, the US, Switzerland, and I think a few other places. Then it was time for bed because I had to get up early for the trip to Semuc the next morning.

Our trip to Semuc started off on in the back of a pick up truck. It’s about a 40-minute drive to Semuc, and about 5 minutes in, we got stopped at the construction checkpoint. There was construction going on far down the road and they had just closed it off for the 45-min interval. So we all got out of the truck and waited around in the hot morning sun until finally they let us through! It was a very bumpy and dusty ride, and the 10 of us sitting in the back of the truck arrived with dust-colored hair, clothes, and skin. We immediately took off for our first part of the trip, the hike up to the viewpoint. It wasn’t a very long hike up, but it was so extremely steep that it felt like days had passed. I got to the top, sweating like a pig, and of course we have to pose and take (not so cute looking photos) overlooking the pools down below us! Gorgeous view and it was great that even though I was sweating, we got to look forward to swimming in the pools in a matter of minutes. So we all rushed down as quickly as possible, put our stuff away and went right for the water! Although I did stop for an extra minute because there was a woman with her two children on the fence of the hike – I guess they found a way to hike into the park without actually entering it – and they were selling watermelon! I could not turn that down and it was so refreshing after hiking for so long and on so steep a trail. 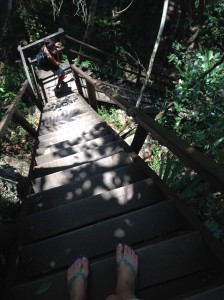 It felt so amazing to jump into the water and it was such a brilliant turquoise. So beautiful! A group of us girls started swimming and then got curious as to where the pools led. So we swam, crawled over the awkward jutting rocks, and found ourselves at the top of a small, fairly uneven natural slide. There was a sort of lifeguard guy standing watch, and we asked him the best way to slide down, to which he suggested just sort of going down, and making sure you keep your hands out, since it was so uneven. When we all got to the bottom and realized there were several more pools, we wanted to keep going but realized that everyone else going down the slides had their guide with them. So we waited around a few minutes and finally our guide caught up to us. He took us over to this ledge under the rocks and told us there would be a small cave. So we had to swim under the ledge and when we came up there was a teeny cave, with just barely enough space for you to keep your head up. It was a pretty creepy experience, but one by one everyone went under, and then we walked a little ways down, still with our heads just bobbing above the water, and then finally swam out, back to before where we started. Then it was time for more slides. The slides were pretty crazy, and I definitely got a bruised and scratched up bum as the guide set us up in the perfect position to slide and then pushed us down. So much fun!

We finally got to the bottom of the pools and couldn’t go any further. The river continued, but only after dropping off a waterfall about 40 feet onto lots of rocks. So we trekked back up the path that weaved through the pools. I got a little too cocky about my balancing skills, and almost immediately my ankle twisted, threw me off balance, and I landed right on my knee. It swelled and immediately turned black and blue and purple, which I’ve never had happen before, at least so suddenly. But actually didn’t hurt too bad, and luckily I was still able to walk. We got to the top of the pools and gathered all our stuff to head back to the entrance and go eat lunch. After lunch was the cave adventure!

We entered the caves holding only a candle, as they do not have any lighting, and you can’t see almost immediately after you enter. We walked ankle deep into the cold water, and before I knew it we were swimming through the water, still holding the candles. Then we had to climb up onto the most treacherous hanging ladder I’ve ever seen, still holding the candle, which then was attached to another hanging ladder, and then we jumped back into a big pool and swam until we reached a ledge to stand up on. This was pretty much how the entire cave tour went: swimming and trying to balance a candle in one hand, climbing up ladders, pulling ourselves onto and over ledges and jumping back into the cold water. As we were swimming, we had to be very careful not to run into the unexpected underwater rocks, and with very little light, even if it was just below the water, rocks were impossible to see. My favorite part was climbing up a rushing waterfall while only holding onto a rope and pulling ourselves up over the edge, and maneuvering our way through a little tunnel. It was such an experience! At the end of the cave was an opportunity to jump from about 20 feet up into a big pool, but the trek to get up to the jump off spot just looked way too precarious. Only 2 people in our group of 15 did it, and one of them had done it before. Maybe if I had been wearing better shoes I would have done it, but I only had flip flops on, and not water shoes like most people. On the way back down through the cave we pretty much did all the same things, this time repelling down the waterfall, etc. And our guide at one point used the candle flames and wax to make this black paste and he painted all of our faces with designs. So funny! Then we were headed back to Lanquin on our dusty truck ride.

Dinner at the hostel was amazing yet again, this time a Thai buffet (with rice noodles – I was stoked). And after stuffing ourselves, it was time for bed and another early morning of packing to hop onto my next shuttle headed for Flores!

One thought on “My Semuc Champey Adventure!”